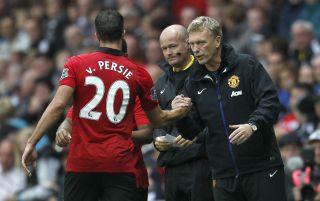 The Dutchman scored the first goal of the Moyes era in the Premier League with a perfectly executed volley, before adding the third goal of the game with an emphatic strike from the edge of the penalty area.

Danny Welbeck also scored twice in United's victory - to eclipse his goal tally from the whole of last season - and Moyes also recognised the impact the England forward had on the game.

"I think his (Van Persie's) foot was seven feet high in the air when he hit it (for the first goal)," Moyes told MUTV. "It was great athleticism and a good pass by Ryan (Giggs) that got us in.

"But I was nearly as pleased by the goal Danny got. I like centre-forwards to score tap-ins inside the six-yard box. If you're ever going to get a lot of goals in the Premier League, you're going to have to get a few of those in the season so it's a good start for Danny.

"Obviously, he's got the fourth too, which he earned through his hard work throughout the game.

"They tell me Danny only got one (league goal) last year so he's got two now. It's a start and if we can get everybody chipping in, it's great but it'll do Danny's confidence a lot of good."

Moyes' United face a tough couple of games in the coming weeks with clashes against Chelsea and Liverpool.