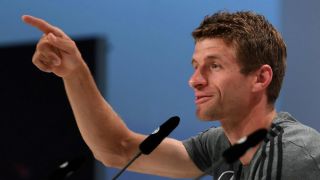 Germany attacker Thomas Muller is adamant he is not concerned by his lack of goals at Euro 2016 as he is only thinking about winning the tournament.

The Bayern Munich star was Germany's top scorer during their qualification campaign with nine goals, but he has yet to find the net at the finals in France, despite getting a number of fine chances.

However, Muller has stressed that scoring is not important to him if Germany are ultimately successful, with Joachim Low's side taking on the hosts in Thursday's second semi-final.

"Goals are not what fuels me. They are maybe the paint job to my car, to look good to the outside. But I am fuelled by my desire for success," Muller said at a news conference ahead of the clash in Marseille.

"Sure, I would have liked to score. But In South Africa, I finished the World Cup as the top scorer. I missed out in the semi-final with a suspension and we went home. I enjoyed Brazil a lot more.

"But a goal would help as I would not to have to answer questions about me not scoring anymore."