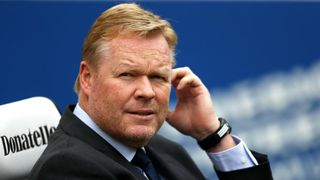 Everton manager Ronald Koeman played down suggestions that the pressure on him is mounting after their 1-1 draw with Brighton and Hove Albion, claiming his "whole football life" involves such scrutiny.

Wayne Rooney's late penalty rescued a point for Koeman's men at the Amex Stadium, but it did little to gloss over what was yet another poor performance.

Anthony Knockaert had given Brighton the lead only a few moments earlier, before a moment of madness from Bruno saw the hosts' captain appear to elbow Mason Holgate in the face and concede the spot-kick.

Although it will prove a welcome point, particularly given the dramatic circumstances, the goal is unlikely to mask fans' concerns.

Koeman is not worried about a perceived increase in pressure, however.

"If I don't get pressure from outside I put pressure on myself. At least we got one point, I think a point well-deserved.

"We are in a difficult situation, but it's one thing to come out of this and show fight like we did today.

"We were the better team, most of the time we had good ball possession - maybe we had to create a bit more.

"After 1-0 we showed character and finally maybe had to win the game in the last few seconds."

Chris Hughton, meanwhile, was frustrated that his team were unable to hold on to the win.

"[I'm] incredibly disappointed at this moment," he added. "Because of the timing, it feels more like a defeat.

"I thought we were good value. Incredibly disappointed in the manner we conceded. We were up against a very good Everton team, but at that stage I couldn't see them scoring."