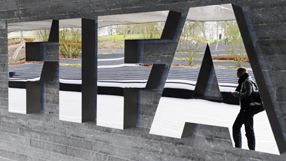 Myanmar, already 2-0 down from the first leg in the preliminary round tie, were trailing 2-0 in the second leg in their capital Yangon when the violence broke out just before the end of the first half.

FIFA immediately awarded Oman a 2-0 victory which saw them through to the next stage and left Myanmar eliminated from the 2014 competition.

Japanese referee Ryuji Sato was forced to halt the game two minutes into stoppage-time at the end of the first half when fans hurled rocks and glass bottles at him, the visiting coach Paul Le Guen and the Oman players.

Despite a heavy police presence, Myanmar fans turned unruly when Sato awarded a penalty to Oman with the home side already trailing 1-0.

Oman's Ismail al Ajmi converted the spot-kick to put his side 2-0 ahead after 39 minutes, sparking anger among the crowd at the Thuwunna Stadium and prompting the players, referee and coaches to flee for cover in the dressing room.

In a statement, FIFA's Disciplinary Committee ruled that the Myanmar Football Federation breached the Disciplinary Code in terms of the conduct of its supporters.