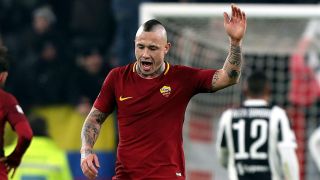 Inter coach Luciano Spalletti believes Radja Nainggolan was the man his team were missing, as he prepares to welcome the midfielder to the Serie A club.

Nainggolan, 30, is expected to complete a switch from Roma to Inter in the coming days, with the capital club reportedly receiving €24million, Davide Santon and Nicolo Zaniolo.

It will see former Roma coach Spalletti and Nainggolan reunited, and the Inter boss feels the Belgium international has been the man his team were lacking.

"He is the turbine we were missing from our engine," Spalletti told Sky Sport Italia.

"The fact that as soon as he was on the market, he chose to come to Inter is an important sign for us.

"He can do well. He has the character to go against any opponent. He is a ninja. He fights with everyone on any field."

Spalletti also confirmed the arrival of defender Stefan de Vrij would mean a switch to a back three for Inter.

Meanwhile, Santon arrived in Rome on Sunday, a further indication the deal involving Nainggolan is close to completion.