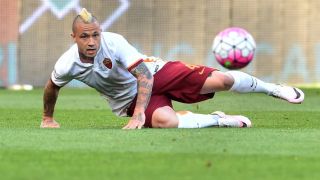 Radja Nainggolan has insisted that he has no intention of leaving Roma amid ongoing speculation he could depart the Serie A side for Chelsea.

New Chelsea manager Antonio Conte is a keen admirer of the combative midfielder and had been hopeful of luring him to Stamford Bridge.

However, Nainggolan has made the decision to stay at Roma after a meeting with sporting director Walter Sabatini.

"I met with Sabatini and everything went well," the Belgium international told reporters.

Nainggolan joined Roma on from Cagliari in January 2014 before the switch was made permanent in June 2015 and has since developed into a key figure at the Stadio Olimpico.

He has a contract with Roma until June 2020.

The 28-year-old was an integral part of the Belgium side that made it to the quarter-finals at Euro 2016, scoring twice in five appearances.