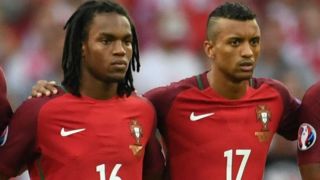 Bayern pipped United to the signing of the highly-rated Sanches, securing the 18-year-old on a five-year deal from Benfica for an initial fee of £27.5million.

Nani believes Sanches - who was one of Portugal's best as they secured a spot in the Euro 2016 semi-finals on Thursday - could have been a star at Old Trafford, but decided a move to Bayern was best for his career progress.

"Renato would have been a great signing for Man United. I have no doubts," said Nani, who joined United in 2005 before moving to Fenerbahce last season.

"But he had a choice - and the choice he made was Bayern Munich.

"I hope he has made a good choice and that he is happy in his career, but I think United will now know what a big player they have missed.

"Renato is a very confident player. He is very young, but he already has a great personality for the game. He isn't scared to play in the big games and he isn't scared to show his qualities against any opponent.

"It is good to see another young player want to be a star and to achieve his dreams. You must be like that. You can't be afraid of anything, and he isn't."