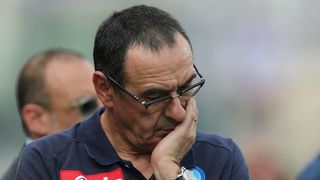 Sarri – who is set to join Premier League side Chelsea – guided Napoli to their second runners-up finish in three Serie A seasons but the Italian boss was replaced by Carlo Ancelotti at the end of the 2017-18 campaign.

De Laurentiis was critical of Sarri and his lack of rotation throughout the season after Napoli threatened to dethrone titleholders Juventus last term.

Reflecting on Sarri and the past campaign, De Laurentiis said: "Last season was distorted and snatched from us: we belong to what [former Italian actor] Toto called 'The Band of Honest Men [referring to the film].

"That aside, there were errors in judgment throughout the season, the ability to be able to use the squad fully…

"Still, I don't want to get into a technical speech or re-open any wounds that have healed."

Former Napoli forward Cavani – who played a starring role for Uruguay at the World Cup in Russia – has been linked with a return to Stadio San Paolo.

"I know you'd all like him, but I can clear this up immediately," De Laurentiis added. "Edi earns €20m every 10 months. Having him and not letting the others play, at a time when our coach has just taken charge, would be a serious problem.

"Having only one player isn't enough to win: we had Higuain, who broke the [goal scoring] record with us to earn double.

"We're making assists, those who work with us break records and go on to earn double.

"Cavani has my number. If he wants, he can call me, lower his salary and put me in touch with PSG. I know he'd like to come back, but he had no qualms about leaving to earn three times more."