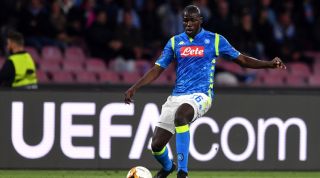 The 27-year-old has been regularly linked with a Premier League move after impressing under Maurizio Sarri and now Carlo Ancelotti in Serie A.

United are eager to freshen up their squad over the summer following a disappointing campaign in which they finished sixth in the Premier League, and the Mirror believe Koulibaly is their top target.

The defence is a key area needing strengthened in Ole Gunnar Solskjaer’s squad and the Senegal international has proven to be one of the best in Europe during a five-year spell in Naples.

However, it could take a record fee to bring Koulibaly to Old Trafford with Ancelotti keen to retain his star defender.

The centre-half has made 34 Serie A appearances this season, scoring two goals, and has a contract at the Stadio San Paolo until 2023.

A right-back, midfielder and forward are also said to be on Solskjaer’s summer wish-list.

QUIZ! Can you name the 28 players with most fouls in the Premier League this season?