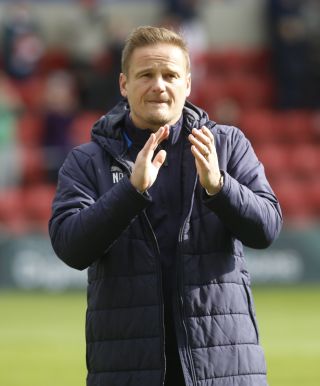 The 47-year-old insists the culture of the club has been key ahead of Sunday’s National League play-off final with Harrogate.

Ardley made 301 appearances for Wimbledon and was part of the Crazy Gang in the early 1990s which included Vinnie Jones, Robbie Earle and John Fashanu.

Now, he is on the brink of taking Notts County back to the EFL at the first attempt after last season’s relegation ended their 157-year stay in the league.

Let's start the week right with another look at the two brilliant goals that fired us to Wembley! 👏 pic.twitter.com/cbagQ68ggm— Notts County FC (@Official_NCFC) July 27, 2020

Ardley had to piece the club back together and while he conceded they cannot employ the Crazy Gang’s old methods he can see a resemblance in his players.

He said: “The game has moved on, there were a lot of things we did in the Crazy Gang which we wouldn’t get away with now.

“Things are different and you have to be modern but characters and inner strength is a dying breed. It’s harder to find those players the way society has brought up youngsters, it can be a bit softer.

“They are still out there though and that’s what we set about doing. If you’re going to change the culture we needed that strength and character.

“There’s a similarity here as at Wimbledon there was a mentality of ‘you do your job’. I won’t work with a blame culture but people will point fingers at each other and demand from each other.

“That happened at Wimbledon, if I didn’t do my job I had Vinnie Jones and Robbie Earle alongside me and, my God, they let you know. In this case my players have got Michael Doyle, Ben Turner and Jim O’Brien and they will let them know.

“They came because they said ‘wow, what’s this club doing in the National League?’  That mentality was apparent right from the start.”

Ardley oversaw relegation, which came after a 3-1 defeat at Swindon, before Alexander and Christoffer Reedtz bought the club from Alan Hardy in July 2019.

The former AFC Wimbledon boss admitted he thought he would get sacked by the new owners but remained in the job and guided them to third before the coronavirus pandemic ended the season early.

“When I came in to do a job, albeit a tough job where I was firefighting, if you don’t achieve it you feel like you’ve failed,” said Ardley, whose Magpies beat Barnet 2-0 in their semi-final last week.

“To stand in front of people in tears in the crowd you feel like a failure. It took me a while to get over it.

“I put a brave face on around the family but I had that sinking feeling of failure and believed I might not get the opportunity to make a difference.

“They’ve had about 22 managers in 20 years here, you don’t need to be a rocket scientist to feel that was the likely outcome but here we are now.

“This feels like a club again, I couldn’t say that last year because it felt broken. It hasn’t happened overnight.”