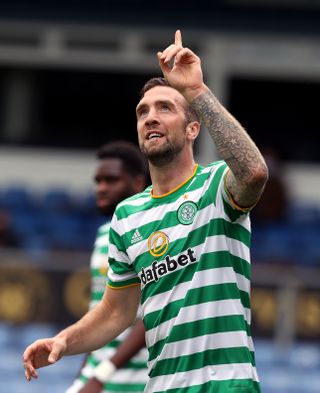 Neil Lennon claimed Shane Duffy looked “peerless” after his debut goal for Celtic in the 5-0 Premiership win over Ross County in Dingwall.

The home side gave as good as they got in open play in the first half but found themselves behind to an early Odsonne Edouard penalty and a goal from strike partner Albian Ajeti, who was making his first start for the visitors.

County were left with no chance when Republic of Ireland defender and life-long Celtic fan Duffy, a loan signing from Brighton, powered a header in from a corner on the hour mark.

Fellow defender Kristoffer Ajer tapped in a fourth before substitute Patryk Klimala added a fifth to leave Lennon’s side six points behind leaders Rangers with two games in hand, one of which is against St Mirren on Wednesday night.

Duffy was playing his first club football since July and the Celtic boss was impressed.

Lennon said: “Shane had the two games for Ireland which will have done him the world of good.

“He hadn’t played that much football. Same with Ajeti, he needed a run out and today he’s produced a great striker’s goal.

“Shane, we all know what the club means to him, but to score on his debut was just great. I think after the goal he just looked peerless, just outstanding.

Lennon was also pleased to see recent signing from Motherwell, David Turnbull, come on to make his debut on a day when there was a “lot of positives”.

He said: “I was delighted to put him on. He’s a good player and showed some nice touches.

“I thought second half we were superb. We looked a real threat, very powerful. I thought my goalkeeper had a fine game when called upon, he had some good saves.

“Overall I’m thrilled. We will get better. I think we can play better and we will as we go along.”

He said: “Everyone that was here could see how well we performed in large parts of the game and it’s so hard to take.

“I won’t make a case for getting something out of the game when you lose 5-0 but we never went on the back foot.

“We lost 6-0 at Parkhead last season but it could have been 10-0. We couldn’t string two passes together, they created umpteen chances and our goalkeeper made saves.

“But here our goalkeeper didn’t make a save and that gives you an indication of the game.

“I thought we were exceptional but we didn’t attack their 18-yard box with real quality in terms of capitalising on our chances.

“We also didn’t defend well either from two corners, a free-kick and we obviously conceded a penalty but when you lose these games 5-0 you think it’s from open play and them carving us open but that wasn’t the case. “