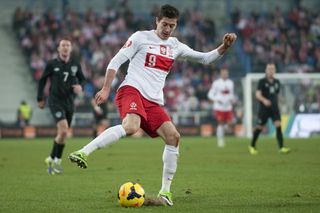 Neuer will captain Germany in the absence of midfielder Bastian Schweinsteiger in Warsaw on Saturday as the world champions look to build on their 2-1 win over Scotland in last month's Group D opener.

Lewandowski has scored four goals in 11 appearances for Bayern so far in his debut season with the Bavarian giants, and Neuer knows the Germany defence will need to be on guard to stop the 26-year-old from adding to his international tally.

"Lewandowski is one of the world's best strikers," Neuer said. "We will have to be careful.

"It's important to be kick on from our three points against Scotland, but it will be a tough game in Warsaw."

Andre Schurrle trained away from the rest of the squad on Wednesday due to a foot injury, however, team manager Oliver Bierhoff revealed that the Chelsea forward has made good progress.

"Things actually look good for Andre Schurrle at the moment," Bierhoff said. "We're expecting him to be able to return to training tomorrow [Thursday]."