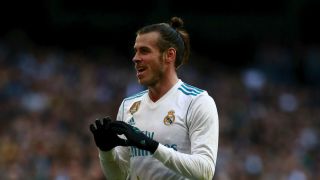 Real Madrid forward Gareth Bale is not worried about facing Neymar and Paris Saint-Germain in the Champions League next month – because he is too busy watching golf.

Bale continued his encouraging return to fitness with two goals and a man-of-the-match showing in Sunday's 7-1 demolition of Deportivo La Coruna.

Nevertheless, Wales star Bale claims he is currently more interested in the form of Dustin Johnson and Jordan Spieth than Neymar and Kylian Mbappe.

"I don't really watch much football, I'd rather watch the golf to be honest," he told ESPN FC when asked about PSG's prowess.

"We've not really thought about the Champions League yet, it's still a bit of time away.

"We have to focus on each and every game at the moment, build confidence and get back to winning ways."

Sunday certainly represented a step in the right direction after Adrian Lopez's opener for Depor threatened to turn the Santiago Bernabeu's atmosphere in a mutinous direction.

But Bale inspired the turnaround, with Nacho and Cristiano Ronaldo also hitting braces, and he received a standing ovation when he was replaced by Lucas Vazquez.

"Yeah, instead of whistles, which is always good," he said, having previously been on the receiving end of Bernabeu abuse.

"It would have been nice to have stayed on to get the hat-trick, but the most important thing is always to get the victory and to try and get some confidence back in the team."