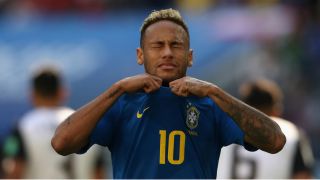 Neymar can still make a decisive impact on the World Cup, according to his former Barcelona team-mate Ivan Rakitic.

The Brazil superstar won his race to recover from a broken metatarsal in time for Russia 2018, but his performances so far have been patchy.

Neymar managed to punctuate a tale of missed chances – he has attempted more shots than any player in the tournament with 16 – by scoring a goal to round out the 2-0 stoppage-time win over Costa Rica in the middle of Brazil's Group E campaign, but his full-time tears drew a mixed response.

He drew another blank in the 2-0 victory against Serbia that set up a last-16 meeting with Mexico, but Rakitic has little doubt the most expensive player in the world will live up to his billing.

"Neymar is among my favourite players in the world," the Croatia star told a news conference. "I would always want to have him in my team.

"He has a special way of playing which doesn't necessarily suit everybody, but that's him. That's his style and he is enjoying playing football, so he takes a lot of risks.

There are no such questions over the form of Rakitic and his Croatia colleagues, whose 3-0 demolition of Argentina was the highlight of an unblemished group stage.

If they negotiate a last-16 tie against Denmark, a potential quarter-final against Spain awaits and Rakitic believes the 2010 winners are favourites despite one win and two draws so far.

"To be honest, I see Spain above everyone else. I think they are the main favourites of this tournament," he added, with hosts Russia up next in Moscow for Fernando Hierro's side.

"It's tough, they had three difficult games in the group, [but] the confidence they are playing with is one level above everyone else.

"I know them very well, I wish them all the best. But hopefully the quarter-finals will be enough for them.

"Then they are a little bit tired and can use some rest, especially if they are playing against Croatia!"