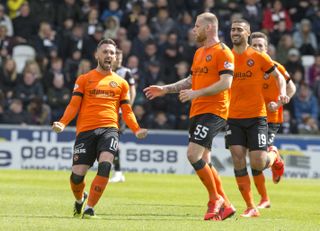 Nicky Clark is looking for Dundee United to use Wednesday night’s Betfred Cup tie against Brechin on to shake off the disappointment from their last-gasp defeat by Livingston.

The Tannadice attacker curled in a 25-yard free-kick for the home side after 18 minutes on Friday night to give the home side the interval lead against a lively and tenacious Livi side.

The Lions kept pushing after the break and United’s resistance was broken in the 53rd minute when defender Jon Guthrie converted a Marvin Bartley cross from eight yards.

And in the 89th minute, when it looked like Micky Mellon’s men would take a point, the West Lothian side grabbed a dramatic late winner with attacker Alan Forrest knocking in a pass from substitute Matej Poplatnik.

Clark, while pleased with his goal, believes United have to quickly to move on.

He told DUTV: “Obviously I was delighted to see it go in. Personally it was good to score but overall I am the same as the rest of the boys. I’m hurting.

“It was a horrible way to lose the game.

“We need to move on now. There is a cup game coming up during the week so we need to go and do well in that cup and bounce back.

“It was really sore. It wasn’t a great game, it was a battle for the majority of it and they are good at that.

“They are an experienced team and to lose it was horrible.

“After about 75/80 minutes we probably should manage the game better and take the point.”

Livi boss Gary Holt revealed he had challenged his players to respond to the interval scoreline.

He told LFC TV: “After dominating the game, creating good chances, away from home, I said to the boys at half-time, who wants it?

“Who wants to make a name for themselves?

“And I think every single one of them in the second half was outstanding.”