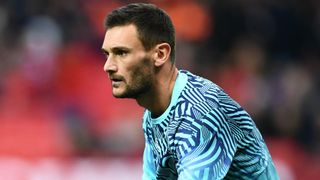 The return dates of Hugo Lloris and Michel Vorm remain unclear with both Tottenham goalkeepers ruled out of Wednesday's EFL Cup match against Watford.

Captain and World Cup winner Lloris has, according to the club, "progressed to field work" after missing the past four matches with a thigh issue.

Vorm deputised for three successive defeats before being sidelined by a knee injury, leaving third-choice Paulo Gazzaniga to step in for the 2-1 weekend win at Brighton and Hove Albion.

The former Southampton keeper will retain his place on Wednesday with Mauricio Pochettino unwilling to set timelines on Lloris and Vorm just over a week out from a Champions League clash with Barcelona.

"Nothing has changed because Hugo and Michel are still injured," Pochettino told reporters.

"It means Paulo is going to play and of course Alfie [Whiteman] and Brandon [Austin] in contention.

"We'll see after the next few days if they can arrive to be ready for [Saturday's match] against Huddersfield. If not then Barcelona, if not Cardiff and if not after.

"We cannot change, the process is the process. They need time to recover. We'll see what happens in the next few days."

Pochettino confirmed he would make "five or six" changes for the third-round meeting with Watford, which will be played at the home ground of fourth-tier side MK Dons.

Wembley is unavailable after Anthony Joshua's world heavyweight bout over the weekend and construction on the club's new venue is yet to be completed, although the Spurs boss is ready to do whatever it takes to speed up the process.

"If I have to go after training and help the builders finish the stadium as soon as possible so the fans will be happy and the chairman will be happy, I promise I will go," he joked.

"Of course we feel disappointed for our fans but they need to understand it is a venue for the rest of our lives and for the next generations, and it is so important to finish in the right way.

"Maybe one or two months means a lot, but in the end it is no time because the most important thing is to finish and be safe when we move there."