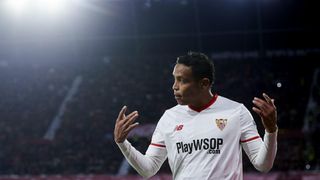 Nolito and Luis Muriel returned to Sevilla training in a timely boost before next Wednesday's visit of Manchester United in the Champions League.

Club-record signing Muriel has found his feet at the club under new coach Vincenzo Montella – who also coached him at Sampdoria – having struggled during Eduardo Berizzo's brief time in charge.

But he suffered a muscle strain in the 1-0 win over Girona on Sunday, a problem which forced his substitution after 64 minutes.

Nolito was missing entirely from the squad for that victory, with the former Manchester City winger last featuring in the 5-1 thrashing by Eibar on February 3 due to a hamstring injury.

But both were back in training on Thursday ahead of the trip to Las Palmas on Saturday, with United's visit in the first leg of the Champions League round-of-16 tie taking place at the Ramon Sanchez Pizjuan on Wednesday.

It's good news!!! Nolito and Muriel are back training with the rest of the team  February 15, 2018

Ever Banega remains a doubt, however, with the Argentina international expected to miss the Las Palmas match with a hamstring injury.