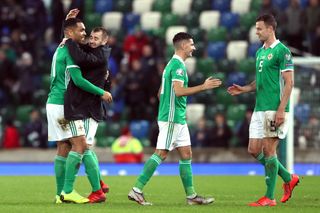 Michael O’Neill hailed Josh Magennis after the Bolton forward’s late goal lifted Northern Ireland to a 2-1 win over Belarus and top spot in Group C of the Euro 2020 qualifiers.

Northern Ireland were in danger of dropping two points in a game O’Neill had identified as must-win until Magennis struck three minutes from time, capping a flowing move he helped spark himself.

It was sweet relief for Northern Ireland, who had seen Igor Stasevich hit a deflected equaliser within moments of Jonny Evans’ 29th-minute opener.

With time running out, Craig Cathcart pumped a long ball forward for Magennis, who brought it under control and spread it out wide for Stuart Dallas. He in turn fed Paddy McNair, whose low cross was swept home by Magennis.

“It was a great piece of play,” O’Neill said. “People maybe don’t realise the quality that Josh has. He’s improved immensely, certainly in the period I’ve been in charge.

“It is brilliant. He takes it down great, lays it off and then attacks that space.”

Magennis joined up with Northern Ireland from a difficult situation at club level, with Bolton still facing the threat of administration or liquidation over unpaid debts.

O’Neill said the 28-year-old had not let it affect him.

“I don’t think so at all,” he said. “I think he enjoys coming in. He’s a very popular figure in the squad, valued in the squad as well. For me as a player he’s invaluable.

“I think a lot of people didn’t really know what Josh was or what he was going to become as a player but that’s his fifth international goal so I think he’s proving a lot of people wrong.”

Though they left it late, Magennis’ goal was reward for Northern Ireland’s relentless attacking endeavour in the closing stages, which saw them dominate the game statistically with a total of 15 attempts at goal.

But after Magennis restored their lead, there was a late scare as Bailey Peacock-Farrell made a good save to deny Pavel Nekhaychik from point-blank range with virtually the last kick of the game.

“It was a great save from Bailey,” O’Neill said. “He made one against Estonia and now one tonight.

“Bailey does brilliantly to keep it out. It would have been a travesty to have conceded then.”

Following on from Thursday’s 2-0 win over Estonia, Northern Ireland can enjoy the view from the top of Group C, three points clear of the Dutch who have won one and lost one, and Germany who beat Holland 3-2 in their only qualifier so far.

With the next games not until June – when they will play Estonia and Belarus away – the table will make enjoyable reading for the Green and White Army.

“The mood in the dressing room is brilliant,” O’Neill said. “We’re top until June! I know it sounds a bit ridiculous but it’s a significant thing because we talk about momentum and that’s how you get it. You get positivity.

“The games in June are difficult games but they’re easier when you go in with momentum from the two performances and results.”

O’Neill added that he did not expect Ollie Norwood, who missed this week’s games for personal reasons, to return for the next two fixtures.

“I don’t think Ollie will be available for June,” he said.