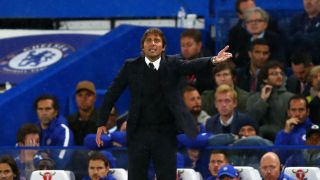 The English title-holders were magnificent in overcoming Atleti 2-1 in the Champions League on Wednesday but after the match Conte complained that City had been granted extra rest ahead of a crunch domestic clash – Pep Guardiola's men having beaten Shakhtar Donetsk 2-0 on Tuesday.

"It was a tough game but we know very well that Manchester City is a really big team and it's very difficult, this type of game. The details move the result," Conte told BT Sport.

"I think we gave everything and I'm very happy for the commitment, desire and will to fight from my players against a really strong team.

"I think when you play against Manchester City, for sure, usually they dominate the ball.

"In this type of game you need a bit of time to recover, to run and put on pressure. If you are tired it is not simple to go box to box."

When pressed on the issue of fatigue following Chelsea's exertions in the Spanish capital, Conte said: "About this issue I have already spoken. It is not important to repeat the same concept.

"I am very proud to be the coach of these players."

Chelsea's task was made more difficult by top scorer Alvaro Morata hobbling off with apparent hamstring discomfort after 35 minutes.

Conte sent on Willian in place of the Spain striker, only introducing a recognised centre-forward in Michy Batshuayi after De Bruyne broke the deadlock.

"We had to stay more calm during the game and wait for the right moments," the Chelsea boss added.