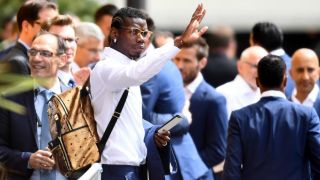 Pogba will undergo a medical at Manchester United as the 23-year-old nears a return to Old Trafford in a record transfer, after leaving the Premier League club in 2012.

Despite the France international's impending departure, Ogbonna - now at West Ham after swapping Turin for London in 2015 - believes the Italian champions can still push on in Europe.

"I think they can [compete for the Champions League]," Ogbonna told Gazzetta World following Sunday's 3-2 loss to Juventus at the Olympic Stadium.

"They have a really good team and squad.

"They'll miss [Paul] Pogba but they've got [Miralem] Pjanic and [Gonzalo] Higuain, so they've got a lot of quality and not much will change."

Andy Carroll scored a brace as West Ham overturned a 2-0 deficit in London, however Simone Zaza scored in the 86th minute to lift Juventus to a late victory.