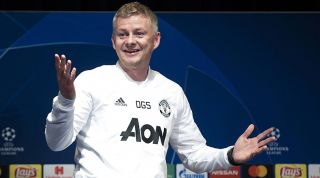 United have to make history at the Parc des Princes if they are to progress from Wednesday’s last-16 clash, given all 106 teams that have previously secured a 2-0 first leg away win in the European Cup have made it through.

Solskjaer freely admits that they have a mountain to climb, but the caretaker manager was quick to point to their European history and PSG’s soft underbelly on the eve of the second leg.

It is just two years since the perennial Ligue 1 champions were on the wrong end of Champions League history when Barcelona recovered from a 4-0 loss in Paris to win the second leg of their round of 16 tie 6-1.

“Of course, everyone knows that we can do it, we have done it – and the results in Champions League in the last few years,” Solskjaer said at the Parc des Princes.

“I don’t want to call it strange, but last year Juventus lost 3-0 at home against Real Madrid and suddenly they were 3-0 up after 90 minutes against Madrid away.

“The year before that, PSG against Barcelona. We all remember those results. So, there are so many examples of teams who can change results like this.

“Also, as a club, we’ve done it so many times. The players have been fantastic away from home, beaten Chelsea, Arsenal, Tottenham, which has given us the belief we can do this as well.”

That belief, and United’s current club-record run of eight successive away wins, is why Solskjaer says this second leg was “never mission impossible”.

If the players need further inspiration, they only need to look to the 1999 treble hero or former manager Sir Alex Ferguson, who travelled with the squad but will not be making a speech in Paris.

“It’s a difficult task but we can do it,” Solskjaer said on the eve of his first away game managing in the Champions League knockout phase.

“Obviously we need the first goal and we need to stay in the game. If there’s half an hour left and there’s one goal in it, anything can happen. But we need a good plan, it needs to be put in place and we need to perform on the night because they are a team full of quality.”

United undoubtedly have the players to hurt PSG, it is just that Solskjaer will be without 10 of them.

Paul Pogba travelled to Paris but his red card at the end of the first leg means he is suspended at the Parc des Princes, where Juan Mata, Ander Herrera, Jesse Lingard and Nemanja Matic are unavailable.

Anthony Martial, Phil Jones, Antonio Valencia and Matteo Darmian are other absentees, while Alexis Sanchez became the latest to miss out after sustaining a knee injury in Saturday’s thrilling 3-2 comeback win against Southampton.

“It was a bad knee injury so if it’s four weeks or six, hopefully, he’ll recover quickly,” Solskjaer said of Sanchez.

“It’s just one of those situations that we come into, that we’ve lost a few players.

“We’ll cope with that, we’ll have a good team out there. We didn’t lose any in the last game – Alexis was the one that we struggled to get fit for now.”

That clutch of absentees has seen United turn to the academy. Tahith Chong, Mason Greenwood, Angel Gomes and James Garner have travelled with the squad again, with 18-year-old Brandon Williams joining up with the senior team for the first time.

“Brandon is a full-back who can play both sides, quick,” Solskjaer added.

“It’s the first time he travels with us – he didn’t expect to come, but that’s part of being here.

“Suddenly you’re called upon, that’s why you’re in the academy, that we believe in you and suddenly you have to step up.”