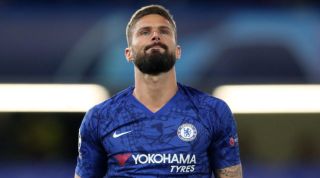 Olivier Giroud looks likely to leave Chelsea in the January transfer window, and he could be in line for a reunion with Maurizio Sarri.

Giroud has found game time hard to come by under Frank Lampard this season, owing to the excellent form of Tammy Abraham, but with Euro 2020 on the horizon he knows that first team football is necessary if he wants to secure his place in the France squad.

Juventus has recently confirmed the departure of Croatian striker Mario Mandzukic to Qatari side Al Duhail, meaning they are in need of a new attacker as they aim to secure another Serie A title.

According to L'Equipe, Sarri would be keen to replace Mandzukic with Giroud. However, it's unclear whether he'd get much more first team football in Turin that he is currently getting in London.

Other reports from Italy suggest that Juventus' interest isn't genuine, and is merely an attempt to frustrate rivals Inter Milan who've already expressed an interest in Giroud, but would need to sell players before making any move. At Inter, Giroud may face the same problem, with Romelu Lukaku and Lautaro Martinez forging an excellent partnership in attack this season.

In a recent interview with Le Dauphine Libere, Giroud outlined his options, all but confirming his Chelsea career will soon be over:

"It will be difficult to stay at Chelsea. "I'm going to have a chat with the coach. There is a good chance that there will be a change because I don't have enough playing time to express myself.

"[Euro 2020] may be one of my last challenges in Blue. I have my sights on the Euro. I am focused on this objective and I will do everything to get there."

In the same interview he confirmed that a return to Ligue 1 could be an option, with Bordeaux and Lyon both reportedly interested.

The 100 best football players in the world 2019: full list revealed