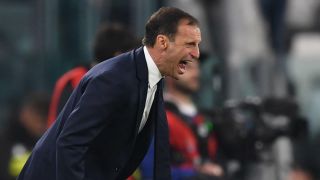 Massimiliano Allegri was full of praise for both teams after Gonzalo Higuain's late strike salvaged a 1-1 draw for Juventus in their derby against Torino.

Adem Ljajic's pinpoint free-kick looked set to secure a famous win for Torino at Juventus Stadium but, after Afriyie Acquah and the visitors' head coach Sinisa Mihajlovic had received their marching orders, Higuain salvaged a share of the spoils for Juve in second-half stoppage time.

Juve coach Allegri, whose side take on Monaco in the second leg of their Champions League semi-final on Tuesday, was in upbeat mood after the game but acknowledged his side lacked composure in their attacking play.

"I would say we should congratulate the two teams, it was a great game," he told Mediaset Premium.

"Juventus have created a lot. We were a bit frantic, we needed more patience.

"We're all happy. They all played well, more or less. We must be calm in attack but today we must not blame anyone.

"Torino played well and were very physical. It was one of the games of the season, it was frantic from the start."

The point takes Juve eight clear of second-placed Napoli, and Allegri's side can seal a sixth successive Scudetto with victory at Roma next time out in Serie A.

"It's a point that brings us closer to the championship," Allegri, whose side also have the Coppa Italia final to look forward to, continued.

"Now, we recover. We have to win against a Monaco team with great talent and quality."