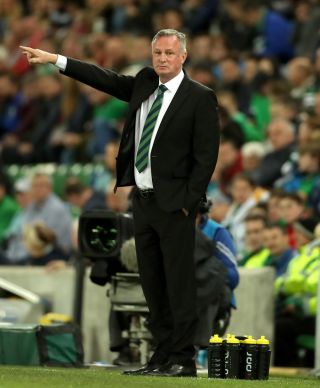 Michael O’Neill credited Northern Ireland’s youngsters with giving his side an extra sharpness and impetus as they finished strongly in Thursday night’s 1-0 friendly win over Luxembourg.

Though Kevin Malget’s calamitous own goal, scored in the 37th minute, was all that separated the sides come full-time, Northern Ireland had several opportunities to add to their lead in the closing stages of the match.

Fans have become accustomed to seeing international friendlies fizzle out in the second half as a flood of substitutes disrupt the game.

But for Northern Ireland the introduction of debutants Alfie McCalmont and Ethan Galbraith, plus Shayne Lavery and Liam Donnelly earning their second caps, as well as Michael McGovern and Steven Davis, saw them lift their game.

“That was the purpose of putting that type of player in,” O’Neill said. “They were dying to get on the pitch.

“Even Davo (Davis), they were all dying to get on the pitch. It was good to get Michael McGovern back on the pitch. All of the subs were designed to add that little bit of hunger.

“Those younger boys gave us that energy. The crowd want to see that, it’s nice for them to see the young players get that opportunity.”

A friendly against Luxembourg just a few days before a huge Euro 2020 qualifier against Germany could have been seen as an unwanted distraction but – having blooded a number of youngsters and extended his side’s winning streak to five games – O’Neill declared the night a “worthwhile exercise”.

While several impressed from the bench, the 21-year-old Ciaron Brown, previously uncapped at any level, started at centre-half alongside Tom Flanagan who earned only his second cap at the age of 27.

“The injury to Callum Morris put us in a difficult situation,” O’Neill said. “I wasn’t prepared to risk Jonny (Evans) or Craig (Cathcart) in this game so (Brown) came in at short notice, as did Tom Flanagan.

“With Tom it’s his second cap and he had to be the leader in that partnership and he did it very well.”

In truth, the game is unlikely to live long in the memory of many besides those making their debuts, with little in the way of goalmouth action and only Malget’s horrible mistake separating the sides.

"We're top of the group, teams have to catch us now" Josh Magennis looks ahead to a massive game against Germany on Monday 👇🏻 #GAWApic.twitter.com/de2abysKlI— Northern Ireland (@NorthernIreland) September 5, 2019

But given O’Neill’s only goal was to emerge with his side’s confidence in tact and his key players fit and ready to go on Monday, he could not ask for too much more.

“It would be nice to score another goal or one of the young guys to score a goal, but we won the game and we have a nice little run now with five wins out of five,” he said.

“We’re in as good a place as we could be going into the game on Monday.

“The only thing that could be better for us is if Michael Smith or Jordan Jones or Liam Boyce were fit, but you can’t have everything.”