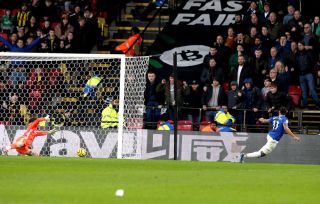 Everton came from behind to win at Watford on Saturday and match-winner Theo Walcott insists the Toffees are now only looking up the Premier League table under the guidance of winner Carlo Ancelotti.

Walcott hit a last-minute goal to secure a remarkable 3-2 victory for Everton, who recovered from two down and a red card to Fabian Delph to leave Vicarage Road with all three points.

Adam Masina’s first Watford goal and a Roberto Pereyra strike looked to have the hosts on course for another vital win in their battle to avoid the drop, only for Everton to strike back.

Yerry Mina scored twice in first-half stoppage time to send the sides in level at the break and – despite Delph’s dismissal for two yellow cards – Walcott provided the heroics as Everton won a Premier League game after conceding the opening goal for the first time since December 2017.

The result takes Everton up to ninth in the table and Walcott is keen for the club to no longer be looking over their shoulder but aiming to join the pack chasing Europa League qualification.

“We have ambitions to go higher,” the 30-year-old told the club’s official website.

“The manager has sent calmness around the place. His experience and what he’s done and won – he’s a winner – and that showed today.

“He kept believing in us at half-time and told us to play our football. It was a hard-fought battle.”

Walcott also praised the unity in the Everton ranks as they bounced back from a disappointing home draw with Newcastle – who scored twice in injury time to secure a point.

“The guys worked so hard. It just shows our togetherness. We’ve been working really hard on the training field and that showed.

“It’s a massive three points and obviously nice for me to get my first goal (of the season).”

While Walcott was enjoying a fine moment, his former Arsenal team-mate Danny Welbeck was making his return from injury for the Hornets.

Welbeck made the short move from the Emirates Stadium to Watford in the summer but has missed four months with a hamstring injury.

He came off the bench for his first appearance since October’s 1-1 draw at Tottenham but admitted he could not relish the occasion and called on Watford to show their character as they sit 19th in the table despite a recent resurgence under Nigel Pearson.

“It is difficult being out with injury and today getting back out on the pitch it was a good moment for me,” Welbeck told Watford’s Added Time programme.

“It is kind of bittersweet because I’m obviously buzzing to be back out on the pitch but with the result it isn’t something you can be too happy about.

“It is very difficult to take the result considering the position we were in during the game and these are lessons we need to learn from and see how we spring back from these disappointing moments.

“Nothing is going to be straightforward, there will be ups and downs but it is how you deal with the downs and disappointing times that will test your character and make you who you want to be.”