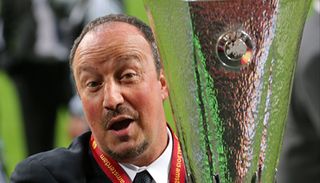 The Spanish coach is leaving after guiding the London side to a Champions League place next season and adding another piece of silverware to owner Roman Abramovich's bulging cabinet.

"We have scored 145 goals and it's a record at the club. You have to win before people realise the job you are doing. So we won, and people may say 'yes, that's quite good'," he told reporters.

The former Liverpool boss was not a popular choice to succeed Chelsea favourite Roberto Di Matteo, sacked last November despite winning the Champions League with the team five months previously.

"It's a team in transition with young players so it was quite difficult from the beginning. I'm quite pleased that when they have a manager who they know is leaving at the end of the season, they still show a lot of commitment," he said.

Abramovich and his board have yet to appoint a new manager, though Real Madrid coach Jose Mourinho who started Chelsea on the road to trophy success in 2005, appears to be a frontrunner for a return.

British and Spanish media have linked Benitez with moves to Everton and to Malaga.

The Spaniard enjoyed unfamiliar applause from the Chelsea end of the Amsterdam Arena when he paraded the trophy with his players.

Among them was Fernando Torres, his former Liverpool striker who has struggled for form since signing for Chelsea two and a half years ago but scored the opening goal on Wednesday before Branislav Ivanovic headed in the stoppage-time winner.

"We have a lot of players who have improved a lot this season," Benitez said. "Fernando is one of them.

"We won the Europa League with one striker - just one. We managed with players with yellow cards... when you analyse it you realise just how hard it was," he added. "And we had injuries with players not available today.