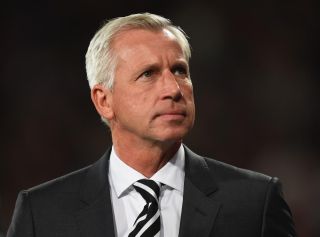 Pardew's men have made a dreadful start to the new Premier League campaign and sit second bottom of the table with just three points from their first six games, their only victories coming in the League Cup against Gillingham and Crystal Palace.

Supporters of the Tyneside club have continually called for the 53-year-old to be removed from his position, with scores of fans brandishing posters reading 'Sack Pardew' at Newcastle's recent games.

However, Pardew remains determined to turn the situation around and is using the ire of the Newcastle faithful as his motivation.

"I'm a manager that's thick-skinned," Pardew said. "I don't ignore it and it's not that it doesn't not penetrate me because of course it does.

"It makes me want to prove people wrong. I need to win games, it's quite simple really. After the games it becomes difficult because we haven't won.

"The most important thing is that I'm putting the fight in the players and they're showing the fight on the pitch."

The former West Ham and Southampton boss believes he is seeing necessary fight, despite Newcastle failing to create much in Monday's 1-0 loss at Stoke City.

"I don't think anyone who watched the Stoke game would say their wasn't fight in the team," Pardew added.

"[We needed] a bit of quality and a bit more flamboyance in the team, and a few more chances created.

"There's the fight though and we need to carry that to every game to the end of the season. I've had one game to go, two games to go from the start of the season. I have to ignore those sort of thoughts.

"I spoke to the chief executive and we discussed ways of trying to help the team and trying to find a solution to get this team to its capacity."