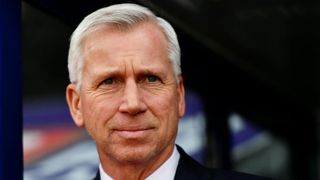 Alan Pardew has confirmed he held talks with West Brom over their vacant managerial position, which he described as an "attractive" job.

Interim boss Gary Megson guided West Brom to a 1-1 draw with Tottenham on Saturday, and the Baggies remain a point above the relegation zone.

Pardew has been out of work since his exit from Crystal Palace last December, but played with and managed West Brom technical director Nick Hammond at Reading.

And, speaking on Sky Sports, former West Ham and Newcastle United manager Pardew said: "It's a club who have a really good set of players. It's a good opportunity.

"Maybe they should be doing slightly better than they are. Looking at them and the depth of the squad, I think it's definitely got improvement in there.

"I've had discussions with them. Obviously it's an attractive job, so we'll see where it goes."