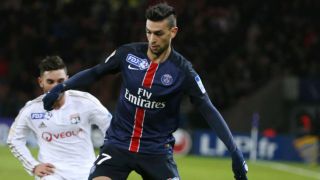 Paris Saint-Germain could be without Javier Pastore and Marquinhos for the second of three games in quick succession with Toulouse on Tuesday.

A hard-fought 1-0 Ligue 1 win over Toulouse marked the first of three fixtures in 11 days with Dominique Arribage's men, who are second bottom in the league – a point behind 18th-placed Guingamp.

They now welcome Toulouse to Parc des Princes as PSG bid to reach the last 16 of the Coupe de France and will do so again in the semi-finals of the Coupe de la Ligue a week on Wednesday.

Saturday's victory came at a cost for PSG as attacking midfielder Pastore and central defender Marquinhos were forced off through injury. Pastore has a calf problem and Marquinhos left the field because of an adductor concern.

Despite those setbacks, Zlatan Ibrahmiovic's 73rd-minute goal settled matters at the Stadium Municipal as PSG secured their 18th league win of the campaign, leaving Laurent Blanc to hail the unity of his players.

"This was a hard-fought victory but I really appreciate it," Blanc said. "There was a little misunderstanding at half-time because we were a bit disorganised.

"When you do not win by being technically superior you have to find other ingredients to win. That's why this result makes me very happy. We demonstrated other qualities such as a desire to win and solidarity."

Blanc felt the condition of the pitch contributed to the difficulties PSG had in seeing off Toulouse and he will undoubtedly be pleased to return to the familiar surroundings of their home stadium.

Holders PSG, who remain unbeaten domestically and are running away with a league title they have won for the last three seasons, will have to wait and see if Thiago Silva and Angel Di Maria will be fit to return.

Di Maria missed the league game with a foot injury and Silva did not recover from a knee problem in time to feature.

Toulouse can at least travel to the capital with some confidence after a performance that delighted their coach.

"I am disappointed with the result because we played real good game and took nothing from it, it's infuriating," Arribage said.

"It was decided on a detail, a set-piece, but that is a characteristic of great teams in this kind of match.

"Everyone will say Paris did not have a great day but that was because we managed to put them in difficulty. The players are aware that they played a good match."