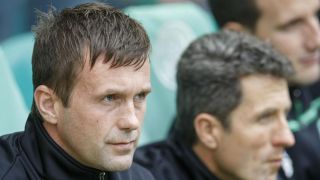 The home side never looked capable of causing Celtic too much bother and found themselves under pressure right from the off, with Rogic opening the scoring just prior to the half-hour mark and Commons wrapping things up in the 63rd minute.

Celtic were dominant throughout and could have already scored a couple before their 28th-minute opener, with Leigh Griffiths thwarted from point-blank range a few moments earlier and then the post denied Virgil van Dijk.

It came as little surprise when Celtic did take the lead, as Rogic produced a deft flick with his heel to find the top corner from eight yards.

Thistle responded to their lack of craft in attack by bringing on Mathias Pogba - the older brother of Juventus star Paul - at the start of the second period.

But the former Crawley Town man was an isolated figure, and Commons eventually added the champions' second just after the hour, exploiting hesitant defending before stylishly chipping over goalkeeper Tomas Cerny.

Pogba forced Craig Gordon into his first save of the day in the 87th minute, but Celtic continuing their winning start to the season.