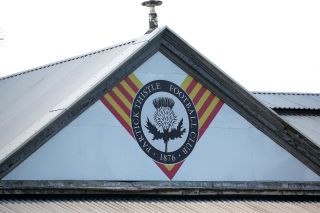 Partick Thistle have joined forces with Hearts to launch a legal challenge to their relegation after a donor offered to fund their court battle.

Both clubs and Stranraer were consigned to the drop on Monday when the latest and last attempt to reconfigure the Scottish leagues failed.

While Hearts immediately launched legal action, Thistle baulked at the cost and risk involved and vowed to focus on building a squad to go right back up to the Scottish Championship.

But the Scottish Professional Football League now faces the prospect of defending its decisions in court against two member clubs.

Thistle chairman Jacqui Low said in a statement: “Yesterday, we said that court action was our preferred route to challenging our relegation to League One. It was only a lack of funding that stopped us. At that time, we reserved the right to change our position should circumstances change.

“Last night, in response to our statement, we received a proposal to fully fund legal action should we wish to pursue it, at no cost to Thistle.

“After careful board consideration, we have now accepted this extremely generous offer of unexpected help.

“Today, following discussions with Hearts, we have agreed that we will launch a joint legal challenge to resolve what others have failed to do since April.”

After initial reconstruction talks were shelved amid a lack of support from top-flight clubs, proposals from Hearts and Rangers both failed before the SPFL hierarchy proposed a 14-10-10-10 set-up.

The new system would have resulted in no relegation plus three runners-up getting promoted and the Highland and Lowland league champions joining the league. However, only 16 of the 42 clubs backed the plan in an informal vote.

Low said: “To those who think we should just move on and accept what’s been dished out to us, yesterday 26 clubs put themselves first. Today, we have now been given the opportunity to do the same.”

The Maryhill side were two points adrift in the Scottish Championship with a game in hand when the coronavirus outbreak suspended play. Clubs later voted to terminate the season with final placings decided on a points-per-game average.

Add 26 to that this morning @The_FOH Never forget that Is in addition to 1,500 between suspension of football and expulsion of @JamTarts . We may be bloodied but are unbowed. An unconquerable soul. https://t.co/rBuZLUJlzW— Stuart Wallace (@srwallace1) June 16, 2020

Hearts supporters have rallied behind their club with about 300 joining or increasing their contribution to the fan-ownership vehicle, Foundation of Hearts, in the first 24 hours or so since the result of the vote emerged.

Foundation chairman and Hearts director Stuart Wallace wrote on Twitter: “We may be bloodied but are unbowed. An unconquerable soul.”

While Hearts have been told their Championship season will kick off on October 17 with 27 matches instead of the usual 36, Thistle are in the dark over when and even if League One will start.

The Jags demanded on Monday that League One starts at the same time and their rival teams have added their voice to the calls.

Falkirk, who were denied promotion by the vote, said in a statement: “Falkirk Football Club is ready, willing and able to return to competitive football action in October which looks to be the earliest point when this will be possible.

“We have expressed that sentiment in no uncertain terms to the SPFL and would urge them to find a format that allows Falkirk, and other teams who are able, to play football in October.”

League Two side Stenhousemuir are also looking to get going in the autumn amid talks with the SPFL and Scottish Football Association.

Update from the Chairman on football, community, and the hopeful return of football to Ochilview https://t.co/yBlLr95WOi— Stenhousemuir FC (@StenhousemuirFC) June 16, 2020

“We face some difficult obstacles to overcome, the most expensive of which is the testing of players. Playing behind closed doors would also present financial challenges.

“However, these are just some of the issues that we are working on and we fully intend to find solutions.

“If games are to be played behind closed doors, then we will try to provide a streaming service so that supporters continue to be part of the action.”