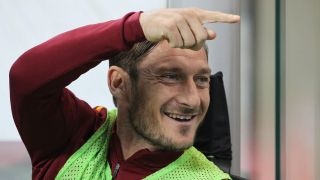 Francesco Totti should carry on playing after he brings down the curtain on his magnificent Roma career this weekend, according to former Italy team-mate Antonio Conte.

The 40-year-old forward is set to bid an emotional farewell to the club he has represented for a quarter of a century when Roma host Genoa on the final day of the Serie A season on Sunday.

In a statement released on Thursday, Totti spoke of his passion to remain in football and tackle a new challenge.

Although this could be a reference to the directors' role he has been previously tipped to take on at Roma, it has done little to prompt speculation that he could seek to play on elsewhere.

Chelsea head coach Conte reflected fondly on the duo's time together for the Azzurri at a news conference to preview Saturday's FA Cup final against Arsenal.

"It's impossible for me to forget. I scored two goals for the national team, and he scored the first one because I only had to put my head forward," he said.

"He put the ball on my head. Francesco Totti, he's a fantastic player, a great player and I knew he wanted to continue his career."

Echoing sentiments he recently expressed regarding outgoing Chelsea captain John Terry, Conte believes Totti should remain in the field if he is passionate about doing so.

"When you arrive at the end of your career, your body, mind and head tell you when it's right to continue," Conte said.

"My message for him is to do what he feels is right to do. If his passion and enthusiasm is always the same, he must continue to play football. He's one of the best players not only in Italy, but in the world."