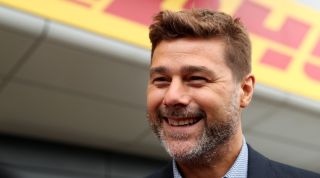 Paul Ince has told FourFourTwo that Tottenham's Mauricio Pochettino would still be the ideal fit for Manchester United - but has dismissed any chance of a relegation battle under Ole Gunnar Solskjaer.

Manchester United sit 12th in the Premier League table ahead of Sunday's home match against leaders Liverpool, and are currently only two points outside the relegation zone.

A 1-0 defeat in their last match at Newcastle United prompted some to question whether they could even be fighting against the drop this season, so poor has been their form - they won just two of their eight league games this season. However, the former United and Liverpool midfielder has dismissed that possibility.

"They've got enough quality to finish in the top half, but it's about the gap to the teams at the top. Leicester are five points ahead - that could be eight if United lose on Sunday."

United have placed their focus on younger players this season but their former midfielder is concerned that performances are not moving in the right direction - in contrast to Chelsea, who have also given opportunities to inexperienced stars under Frank Lampard and sit fifth, only two points behind second-placed behind Manchester City.

"They're a young team and there's going to be some inconsistency in their performances and results," Ince says about Solskjaer's side. "But it's a little bit worrying that there's not been any progress. It's not always about winning games. I think Man United fans understand that the quality isn't there yet - they've got five or six players who've been out injured.

"When you look at Frank's team at Chelsea, you see what they're doing - scoring goals and creating chances. Man United fans can deal with the results as long as you're seeing a performance on the pitch where the Newcastle goalkeeper got man of the match and made eight saves, they've hit the post and the bar. You can accept that, but we're not seeing that - we're not seeing chances."
Pressure has been increasing on Solskjaer in recent weeks, and Ince says clarity is required on the club's strategy.

"If there's a project in place, and they're going to give Ole the next three transfer windows to try to build this team to get close to the top four, then we want to know about it," Ince says. "We don't want it just to be every time he loses a game, it's pressure about whether he's going to stay.

"They didn't need to rush into it, they got caught up with all the adulation from the fans and everyone else. They should have seen what other managers were about - Pochettino, Max Allegri was leaving Juventus. Now they find themselves in a situation where they've got to either stick with it or not."

If they decide not to, Ince believes that Pochettino remains the best alternative - despite Tottenham's poor start to the new season, which sees them sit ninth, only two points above United.

"At the time last season, I felt Pochettino was the man," he says. "He was an ideal fit for Manchester United, given the finances he'd have at his disposal at Old Trafford, compared to what he has at Tottenham. It would have been the next step for him, but obviously that wasn't to be. What's happened at Tottenham this season doesn't change the way I felt then."

Subscribe to the FourFourTwo Podcast on iTunes and Spotify

Ince represented United from 1989 to 1995, helping them to their first two Premier League titles. "There aren't enough leaders in the current team," he says. "When I played, I had Bryan Robson and Steve Bruce to learn from. Then once Paul Scholes, Ryan Giggs and David Beckham came in, they could lean on the experience that I had and Roy Keane had.

"The kids in the team now haven't got that, because there isn't that leadership there. You can't blame the youngsters, they're just kids learning their trade.

"You can't keep changing managers all the time, from David Moyes to Louis van Gaal to Jose Mourinho. But this is Man United, and whatever happens, I don't care how young or old you are, you've got to be performing.

"Under Sir Alex, when I left, when Sparky (Mark Hughes) and Andrei Kanchelskis left, they still had to win things with a young team. They won the league that year. If you're bringing younger kids into the fold, I know they're not going to be Beckham, Giggs and Scholes, but you've still got to be up there challenging.

"I don't think the fans expect United to win the title this year. But they don't expect them to be languishing sixth or seventh from bottom."

Paul Ince is a Paddy Power ambassador. To read more go to http://news.paddypower.com

QUIZ How many scorers from the last 20 seasons of Man United vs Liverpool games can you name?