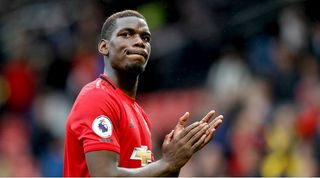 Paul Pogba still wants to leave Manchester United and will not sign a new deal at Old Trafford, report the Daily Mirror.

The France international was linked with Juventus and Real Madrid throughout the summer, but United have been able to retain his services.

However, Pogba is still keen to depart and will refuse any offer of a new contract in Manchester.

The midfielder has told Ole Gunnar Solskjaer that he is committed to United this season, but he sees his long-term future at the Santiago Bernabeu.

United placed a £180m price tag on their star man's head this summer, a fee which proved too large for Madrid.

Los Blancos could return for Pogba next summer, though, and United may be involved in a similar transfer saga ahead of the 2020/21 campaign.