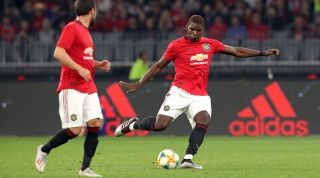 Paul Pogba will most likely be staying at Manchester United this summer, according to Marca.

Pogba’s potential move from Manchester United to Real Madrid has been made even harder this week, according to reports.

Manchester United's record signing cast doubt over his future at the club last month when he commented that he was considering: "a new challenge".

However, Spanish publication Marca now believe it has become ‘practically impossible’ for Los Blancos to sign the United midfielder.

According to ESPN, Real Madrid president Florentino Perez informed coach Zinedine Zidane it will be "very difficult" to sign the midfielder this summer.

Zidane is said to understand United's position and, barring an unexpected u-turn, doesn't expect Pogba will wear a Real Madrid shirt this season.

Despite the midfielder wanting to leave, it seems Madrid may be forced to look at other options this summer. Ajax’s Donny van de Beek and Tottenham’s Christian Eriksen are on their potential wish list.