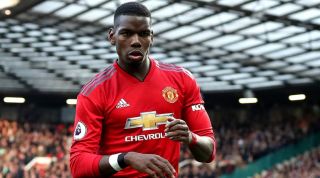 The France international was heavily linked with a switch to the Bernabeu last summer, where Real coach Zinedine Zidane is an outspoken admirer of him.

AS reports that the time is right for Madrid to complete a deal for the 27-year-old this summer, due to his contract situation and a poor relationship with the Old Trafford club.

Pogba has a deal in Manchester until 2021, but the Premier League side have the option to extend it by a further year.

United have contacted the midfielder’s agent, Mino Raiola, about a contract renewal, but if an agreement isn’t found the club could be forced to cash in.

Furthermore, a source close to Pogba has told the Spanish newspaper that it would be a bad idea for United to trigger the one-year extension option, as it would “only serve to anger the player and persuade him to push through his departure.”

Last summer, the Red Devils set an asking price of around £185m for World Cup winner, but he is likely to cost much less a year on, after missing most of the season through injury and with his contract running down.

The outlet estimates that Pogba could now be sold for a fee of €100m (£92m), or even less depending on how the coronavirus pandemic impacts football finances.

Pogba returned to United from Juventus in the summer of 2016 for a then-world record £89m fee.

He has scored 31 goals in 150 appearances for the club, but has been restricted to just eight outings in all competitions during an injury-plagued 2019/29 campaign.

QUIZ! Can you name every city to host a World Cup final?