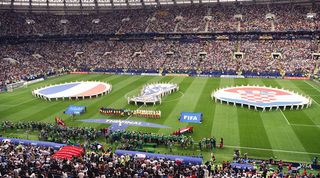 Five minutes on the clock, 21 cities to guess - some appear more than once.

It's the one match every four years that the rest of the world switches on for, regardless of what language they speak or what shape ball they play with.

As of 2018, there have been 21 finals. We're approaching the centenary year of the ol' Coup de Monde in 2030, but we'd like you to name the cities that have had the biggest hosting privilege in the sport.

Lusail in Qatar will take 2022 - providing it's built. The MetLife Stadium in East Rutherford, USA, will host 2026's edition. We just want you to name every predecessor back to 1930...

While you’re here, why not take advantage of our brilliant new subscribers’ offer? Get 5 copies of the world's greatest football magazine for just £5 – the game’s greatest stories and finest journalism direct to your door for less than the cost of a London pint. Cheers!