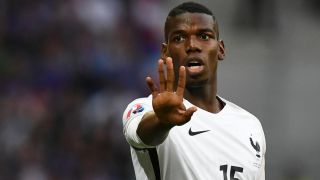 Paul Pogba's agent Mino Raiola has dismissed speculation that his client is on the verge of a world-record move from Juventus to Manchester United.

France midfielder Pogba, who left United on a free transfer to join Juve in 2012, is widely expected to return to Old Trafford for a fee reported to be in the region of £92million – with a further £18.4m going to Raiola.

But the Italian, who also helped to broker moves for Zlatan Ibrahimovic and Henrikh Mkhitaryan to United this close season, posted on his Twitter page to suggest there is a way to go on any prospective deal.

"There is no deal done regarding Paul Pogba, lots of bla bla bla," he tweeted.

There is no deal done regarding Paul Pogba, lots of bla bla bla.July 21, 2016

Earlier on Thursday, United boss Jose Mourinho congratulated the club's board on doing "fantastic work" during the transfer window, with the signings of Eric Bailly, Mkhitaryan and Ibrahimovic representing "75 per cent of the job".

Mourinho added that there were three options with regards to his final transfer target, while he refused to confirm or deny a move for Pogba.

Barcelona director Ariedo Braida claims the Liga champions have been priced out of a move for France international, citing the hike in television rights revenues being enjoyed by Premier League clubs.