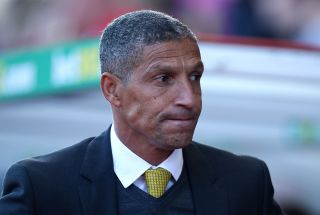 The comments - made on an unofficial Facebook page designed for supporters of Norwich and their rivals Ipswich Town - were made following Norwich's 1-0 win away to Stoke City on Sunday, with anti-racism group Kick It Out reporting the matter to police.

A statement on Norwich's official website confirmed: "The club has been made aware of racist language about our manager Chris Hughton posted on an unofficial fans' Facebook page in the last few days and the matter has been reported to the police as a hate crime.

"Following last weekend's victory for the Canaries away to Stoke, unacceptable terminology was used on the Facebook page. It should be stressed the site is in no way officially affiliated to either club.

"Kick It Out, football’s equality and inclusion campaign, have reported the comments made as a hate crime to the police and Norwich City totally supports this stance.

"We are in dialogue with Kick It Out and Ipswich Town and will co-operate fully with the police investigation into the incident.

"We have a zero tolerance policy on racism and all other forms of discrimination and any supporter found guilty of racist abuse faces a lifetime ban from Carrow Road in addition to any punishment handed out by the courts."

Kick It Out have stressed that they will do all they can to assist the police.

A statement from the group read: "Kick It Out was informed of a racist message posted about Norwich City manager Chris Hughton on an unofficial fans' Facebook page on Sunday (September 29), and instantly brought the incident to the attention of the police via its online reporting facility True Vision.

"A response from the police is now pending."