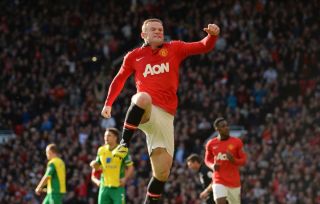 Taking to the touchline in a club suit, United's longest-serving player looked the part in a role that may only be temporary if pre-match speculation linking Netherlands coach Louis van Gaal with the Old Trafford hot-seat is to be believed.

Alex Ferguson has backed Giggs to take on the job full-time, and the hosts displayed an early intensity of the kind associated with the Scot's reign.

Much of United's first-half work lacked penetration, but Rooney scored a penalty four minutes before half-time and then doubled his tally three minutes after the break.

Substitute Mata then struck twice to complete the scoring, leaving Old Trafford delighted and Norwich perilously placed just a point and a place above the relegation zone with two matches remaining.

The two marquee signings of the Moyes era fared badly as Giggs made six changes. Mata dropped to the bench and Marouane Fellaini did not make the matchday 18.

Jonny Howson had the ball in the net for Norwich after David De Gea had fumbled Ricky van Wolfswinkel's ninth-minute header, but the Dutch striker was rightly penalised for a push on Phil Jones.

City's first testing moment came via the United left in the 14th minute when Martin Olsson failed to clear Patrice Evra's searching cross before Danny Welbeck reacted quickest to the loose ball, forcing John Ruddy to save smartly at his near post.

United then found themselves in the all-too-familiar position of struggling for fluency but, after Ruddy had beaten a ball from Valencia out of the goalmouth, the Old Trafford crowd was on its feet in the 41st minute as Rooney converted from the spot.

Jones' speculative pass found its way through a crowd of Norwich defenders to Welbeck, who was clumsily fouled by Steven Whittaker, and Rooney sent Ruddy the wrong way from the resulting penalty to record a 16th league goal of the season.

Norwich were then left with a mountain to climb after the restart when Rooney was allowed to advance unchallenged towards the edge of the area. Despite losing his footing, the England forward's shot curled beyond Ruddy and into the bottom corner.

Robert Snodgrass was Norwich's standout attacking threat and he tested De Gea with a 58th-minute free-kick, having drawn a foul from Nemanja Vidic, but the game was over as a contest five minutes later.

Having saved impressively from Welbeck, Ruddy pushed the ball clear as Rooney sought a hat-trick, but Jones drilled the ball back into the box and Mata converted.

The Spain international then nodded his second goal after Valencia had smashed a 73rd-minute volley across the area, and Old Trafford was able to bask in an optimism rarely felt over recent months.

Substitute Johan Elmander and Bradley Johnson went close and Olsson saw a deflected drive strike the crossbar in a belated Norwich rally, but caretaker manager Neil Adams now faces the daunting prospect of games against Chelsea and Arsenal in which to salvage their top-flight status.