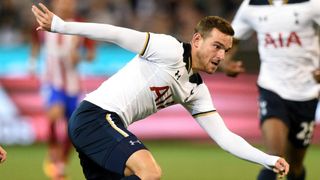 It has been a rapid rise for new Tottenham recruit Vincent Janssen and the 22-year-old could prove to be a vital figure in Spurs' push for the Premier League title this season.

Janssen made his Tottenham debut in a friendly against Juventus on Tuesday, having signed a four-year deal in his £17million from AZ earlier this month, but was unspectacular in a 2-1 loss to the Italian champions.

The Netherlands forward started up front once again as Tottenham tackled Atletico Madrid in Melbourne on Friday, and while Mauricio Pochettino's side lost 1-0, courtesy of a Diego Godin goal, there were much better signs from the new signing.

Janssen's 75-minute cameo produced no goals, but he was a constant threat up front against an Atletico side which is renowned for its defensive prowess, having conceded just 18 goals in 38 LaLiga games last season.

He started the game brightly, turning his defender before providing Christian Eriksen with a chance to test Atleti goalkeeper Jan Oblak, who managed to tip the Denmark international's bouncing shot over the crossbar.

Janssen was right in the thick of it as Josh Onomah hit the crossbar from a corner kick, before brilliantly linking up with Argentine attacker Erik Lamela, whose effort came off the post.

He remained on the pitch in the second half as Eriksen and Lamela made way for Son Heung-min and Tom Carroll respectively, and continued to threaten the Godin-led defence, producing good control and hold-up play.

In a promising sign for Tottenham fans he gave them a taste of his free-kick ability, confidently stepping up to hit a set-piece from a dangerous position in the 70th minute, which would have found the bottom corner if not for a stunning save from Oblak.

Pochettino took him off with 15 minutes remaining when Nacer Chadli came on up front, but Spurs were unable to find an equaliser in the latter stages.

Janssen has already shown he can provide welcome assistance to Harry Kane, with Pochettino's men looking to produce another title challenge, while they also have Champions League football to look forward to.

Kane was Tottenham's top-scorer last season, finding the net 25 times in the Premier League, and started every single game as they finished third, pipped by bitter rivals Arsenal to second on the final day.

With Tottenham challenging for the title, Pochettino elected to use Son and Chadli up front in their Europa League knockout games, but they were eliminated after a 5-1 aggregate loss to Borussia Dortmund in the last 16.

Both of them were unable to adequately fill Kane's void, and it ultimately cost them the chance to go further in the competition.

Janssen, an out-and-out number nine, gives Pochettino something extra for those games, or if he chooses to prioritise the Champions League over the domestic division, he looks able to step into Kane's shoes for the league games as well as providing an option to start two strikers.

The promising early signs suggest the youngster could be a prominent figure at White Hart Lane for many years to come.