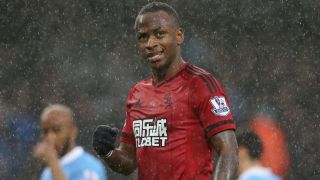 The 22-year-old put in a transfer request last off-season after an approach from Tottenham, before slowly working his way back into Pulis' plans when a move never eventuated.

Berahino has scored just four Premier League goals this season and his deal at The Hawthorns runs until mid-2017.

Despite his striker having another year to run on his contract, Pulis would like to see a fresh deal done.

"I'd like Saido to sign a new contract if he could but whether we'll get that or not, we'll have to wait and see," he said.

"I wouldn't second guess anything but if Spurs do come back in, they will get the same response from [chairman] Jeremy Peace – that it has to be the right deal for the club."

Berahino is without a goal since late February and missed two penalties in West Brom's 1-0 loss at home to Watford on Saturday.

However, Pulis remains confident the striker has the character to bounce back from the spot-kick failures.

"All top strikers in the world who have taken penalties have missed penalties," he said.

"It's all character building for him."