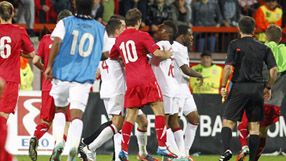 England, leading 1-0 from the first leg, scored with the last kick of the second leg in Krusevac in southern Serbia to secure a 2-0 aggregate victory.

They were then pelted by missiles as they celebrated their winning goal scored by Connor Wickham.

The crowd's monkey chants could clearly be heard as England defender Danny Rose was shown a red card for kicking the ball into the crowd after the final whistle.

"I think there were one or two racist incidents from the crowd, certainly, and they have been reported to UEFA and they will have to deal with that," England coach Stuart Pearce told ESPN.

"It's very sad. A lot is happening in our country in stamping out racism and I am proud of the reaction of our players at the end. Its a real shame because over two legs it was a good tie between two close teams.

"No matter what provocation comes your way, we are in a profession where you have to hold your dignity. That is vitally important as a professional footballer. It was a tough evening tonight for them," he added.

According to the Serbian B92 website, Serbia coach Aleksandar Jankovic, when asked by English reporters if he felt he should apologise for the fracas, replied: "Apologise for what? It takes two for a brawl. We will analyse tomorrow what exactly happened but let's talk about football now."

Jankovic is also head coach of Red Star Belgrade and this was his final game as Serbia's Under-21 coach.

England's Rose, standing apart from the main group of players, got involved in a row with home spectators and began mimicking a monkey by sticking his arms underneath his armpits to demonstrate the racial nature of the abuse.

At the same time, England players and officials were attacked by some of the Serbia players with punches thrown as they tried to enter the tunnel.

"There was a lot of racist abuse out there from the stands and a lot going on after the game, which is hard to take for the players," England captain Jordan Henderson was quoted as saying on the FA website.

"The players coped with the abuse really well. It's not nice, they kept their heads and were professional... the players completely condemn what happened.

"There was also stones, coins and seats getting thrown at us. I didn't understand why Danny Rose was sent off at the end - I didn't see he did anything wrong, other than get abused.

"UEFA must deal with this in the right way."

The English FA added in a statement: "The FA condemns both the scenes of racism and the confrontation at the final whistle during which time our players and staff were under extreme provocation.

"The FA has reported a number of incidents of racism to UEFA following the fixture. These were seemingly aimed at a number of England's black players by the crowd. The matter is now with UEFA."