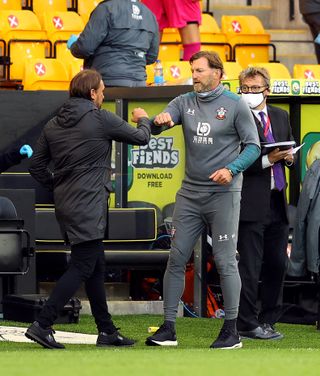 Ralph Hasenhuttl could not have been happier with Southampton’s victorious return to action on a night when Norwich’s survival hopes dimmed.

Having waited 104 days to resume Premier League action due to the coronavirus pandemic, Saints rode an early storm to emerge as deserved victors in front of empty stands at Carrow Road.

Danny Ings and Stuart Armstrong scored early in the second half, before Nathan Redmond completed a 3-0 rout at former club Norwich as manager Hasenhuttl celebrated his new four-year deal in style.

“In the end the result was absolutely deserved, I think,” the Southampton manager said after winning behind closed doors in East Anglia.

“We didn’t have a very good start today, so the first 10, 15 minutes we had (a) little bit (of) a problem finding the game, but it was getting better and better as long as the game was going, the longer game was open.

“I think it was not so easy for us in the beginning but we also in the first half had a few good chances.

“Finally, I think the last pass, the last dribble wasn’t perfect, but after the break Ingsy made the opener and then I think it was an absolutely deserved win.

“We had massive chances, good finishing and, yeah, especially against the ball very aggressive, we never lose our passion against the ball and I think this was a key factor of winning today.

“It’s not so nice when you win and celebrate with 10 or 15 people around you. It would be nice to have your away fans with you.”

Victory was a welcome shot in the arm in terms of Southampton’s survival hopes, with the 3-0 win moving them 10 points clear of the drop zone and just three shy of the 40-point mark.

“We have another eight games and what I can say is that we are absolutely fit,” Hasenhuttl said. “The team looks very, very fit at the moment.

“The longer the game was on, I think we had absolutely a physical advantage. This is important because this is a very intense environment.

“We now have a home game against Arsenal, a good team, so it’ll be interesting.

“We are really looking forward to these next games now and maybe we can climb a few positions.”

The loss is a major blow to rock-bottom Norwich’s survival hopes, with the promoted side still six points adrift of safety with only eight matches remaining.

Canaries boss Daniel Farke said: “Of course after a loss our situation has not improved.

“I made it clear before, out of the last nine games, just because of the points, we have to win five games, so it’s more like a best of nine series and we need to be there with five wins.

“Once you lose the first game, it’s not that the situation has improved.

“It’s getting even a little bit more difficult, but we wouldn’t dance on the table after a win and also it’s not like Norwich and for us to give up after a loss today.

“I think because of the second half today we have to accept the loss and that’s what we do.”