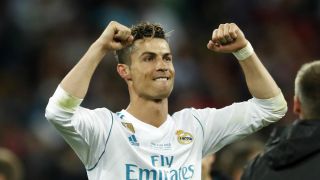 Gareth Bale came off the bench to score twice in the second half as Madrid beat Liverpool 3-1 in Kiev on Saturday.

But five-time Ballon d'Or winner Ronaldo, 33, suggested in an interview with beIN Sports immediately after the game that he is considering leaving Madrid.

"It was beautiful to be at Real Madrid," Ronaldo said. "In the next few days I will give an answer."

However, Ramos said Madrid will be desperate to hold on to Ronaldo, who has helped the Spanish giants to four Champions League titles in five years.

"The result is fair and we are very happy," Ramos said to reporters.

"I do not think there is anything else with Cristiano.

"He is an indisputable piece of our team and he will not be better than here."

Of Madrid's historic third consecutive Champions League triumph, Ramos added: "It was a game of great difficulty, but this team has shown this enthusiasm to keep winning, we have to value what we have achieved."