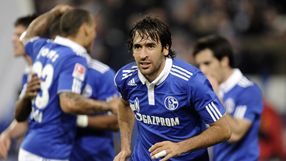 Former Real Madrid striker Raul grabbed his first after 14 minutes when Japanese Atsuto Uchida cut the ball into the box, Huntelaar failed to connect at the near post and the Spaniard slid the ball home from five metres.

The 33-year-old Raul took his tally to three for the season, again from close range, nine minutes from time after Dutchman Huntelaar headed his sixth of the campaign after the break.

Only days ago Raul was told by coach Felix Magath to stop dropping back into midfield to pick up the ball and to spend more time in the box where his natural scoring instincts have made him the Champions League's all-time top scorer.

"I'm glad he scored in the Bundesliga again," said Magath, whose team has struggled in the league this season but can still advance in the Champions League. "I'm happy for him and I think it was a kind of redemption for him."

Schalke's first home victory in the league this season moved them up two places to 15th with nine points from 11 games after last season's runners-up endured a bad start to the campaign.