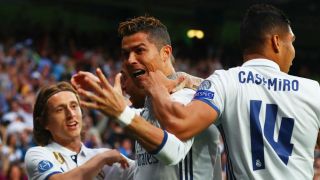 Cristiano Ronaldo once again proved himself to be the man for the big occasion as his hat-trick gave holders Real Madrid a commanding 3-0 advantage in their Champions League semi-final against city rivals Atletico Madrid.

The four-time Ballon d'Or winner has seemingly saved his best for Europe's premier competition this season, scoring five of Madrid's six goals in their pulsating quarter-final triumph over Bayern Munich, and he headed the opener after 10 minutes at a raucous Santiago Bernabeu.

Madrid's fans unveiled a huge banner celebrating the 2014 and 2016 final triumphs over their neighbours before kick-off and Ronaldo ensured the knife-edge tension of those extra-time and penalty shootout wins would be removed from this tie.

The contest fell into a familiarly fractious and cagey rhythm after the interval, but Madrid's talisman intervened to render the last European match at the Vicente Calderon a formality.

Ronaldo rifled an unstoppable shot into the top corner in the 73rd minute and claimed the matchball four minutes from time, meaning a grim catalogue of misery in this European fixture continued for Diego Simeone's side.

3 - Cristiano Ronaldo is the first player to score a hat trick in a Champions League semifinal game since Lewandowski in 2012/13. Machine. May 2, 2017

The hosts should have led in the seventh minute. Right-back Dani Carvajal exchanged passes with Isco and darted into the box, forcing a save from Jan Oblak before Karim Benzema was unable to turn in from close range.

Sergio Ramos' initial cross was cleared by Diego Godin, but Casemiro clattered the loose ball into the turf and back towards the six-yard box, where Ronaldo stole in front of Stefan Savic to head home.

Atletico were rattled and needed a fine save from Oblak in the 16th minute after Raphael Varane glanced Toni Kroos' corner low to the goalkeeper's left.

Oblak's opposite number Keylor Navas was out sharply to thwart Kevin Gameiro, with the Atletico forward's attempt to round him lacking conviction.

Madrid continued to make most of the running – Benzema hooking an overhead kick beyond the crossbar in the 29th minute after Ronaldo tormented Atletico's makeshift right-back Lucas Hernandez to send in the cross.

Carvajal brought down Yannick Carrasco at the other end, giving Antoine Griezmann the opportunity to flight a wonderful free-kick into the Madrid box that a stretching Godin volleyed over.

A highly satisfactory half for Madrid ended with a couple of their players in the wars – Casemiro left with a bloodied lip after defending a 40th-minute corner before Carvajal limped off with an apparent hamstring injury in stoppage time.

The second half resumed at an undulating pace, with Isco and Saul Niguez earning bookings for clumsy fouls on Hernandez and Carvajal's replacement Nacho respectively, but both team struggled for precision with the final ball as the occasion began to weigh heavily.

Isco was a touch fortunate to escape a second booking when he caught Koke late – an argument Atletico boss Simeone made in animated fashion on the touchline – and Zinedine Zidane responded by sending on Marco Asensio in place of the Spain playmaker.

It was a change that married itself to growing tension inside the Bernabeu until Ronaldo took it upon himself to expel the anxiety.

Benzema did well to hold up a Marcelo cross, but Ronaldo still had plenty to do with a bouncing ball and Filipe Luis in close attendance.

He steadied himself to rip a venomous strike beyond the helpless Oblak and leave Atletico staring at a bitter, localised brand of European disappointment once more – one made all the more potent when substitute Lucas Vazquez set up Ronaldo for his seventh Champions League treble.