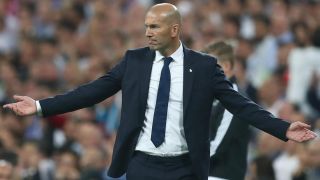 Zidane's men beat Atletico 3-0 in the first leg of their semi-final tie on Tuesday, with Kroos saying after the match that his side's impressive dominance had come due to four midfielders playing on the pitch, Isco having started in place of the injured Gareth Bale.

But the Madrid head coach, whose side face already-relegated Granada at Los Carmenes on Saturday before the second leg against Diego Simeone's men next Wednesday, feels his BBC attackers are all world-class players who benefit the team when played together.

Zidane insisted he disagrees with critics who used Kroos' remarks to suggest that Madrid are weaker when all three of them play, even if the Germany international's views about controlling the game with an extra midfielder are valid in certain situations.

"We always go out to try and play the game - we can start one way and finish in another," Zidane said at his pre-match media conference.

"If you think we have got less balance with the BBC and it is a problem [when they play], then I don't think that is true.

"I think it is the opposite. They are three huge world-class players, they are very good.

"But what Toni says is perhaps true as well, we can have more balance when the game needs it, such as playing with players on the wing who can defend and attack.

"When I make a change it isn't always just to defend, sometimes it is the opposite. When Marco Asensio and Lucas Vazquez came on [against Atletico] it wasn't to defend.

"Everyone can have their opinion but I am very happy with the BBC and all the players.

"To put together a side it is always complicated, all the other players are good, they all want to play and do very well. The BBC also do very well."

Madrid know that 10 points from their last four games will be enough to see them crowned champions for the first time since 2012.

Zidane, though, insists he is not worried about either competition, even though with his side's season hanging in the balance.

"I'm not worried about anything but at the moment we haven't won anything," he said.

"We could win two, one or end up winning nothing. The only thing I can say is all we are doing is we must keep going every day until the last minute of the last match of the season.

"That is what we want to do. Real Madrid wants to do it that way, I can't tell you how things are going to end up, but I'm not worried. The only thing I can say is I like the way that we work."