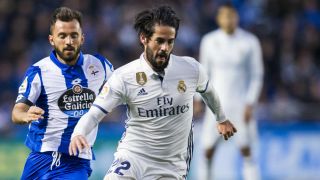 Isco says Atletico Madrid are even more desperate to beat Real Madrid in the Champions League semi-finals because of the recent history between the sides.

Madrid have knocked city rivals Atletico out of the tournament in each of the last three seasons, two of those victories coming in the final.

In-form Isco is eyeing what would be his third European Cup success but knows Diego Simeone's side represent a significant obstacle to achieving that goal, particularly with their enhanced motivation.

"Atletico are a very difficult team and the two-legged matches make it even more difficult," the attacking midfielder said to Codere Apuestas.

"I have been in Madrid for four years and in each of the four we have faced them in the Champions League.

"Hopefully the outcome will be the same as in previous years, but they will be really keen to beat us after the two Champions Leagues that we have won.

"Atletico are a very good team, they have shown that. They compete very well and it is going to be a very close tie."

Isco took the opportunity to cast his mind back to the 2014 and 2016 final victories over Atleti, recalling Sergio Ramos' vital equaliser in Lisbon and last year's penalty shoot-out in Milan as his most memorable moments.

"Ramos' goal still gives me goosebumps, it makes my hairs stand up," said the 25-year-old.

"It was a really important goal and when he scored it I knew we wouldn't lose. It came at a key moment and I felt like I had also scored the goal.

"The shoot-out [in 2016] was the most stressful moment in my entire career. You have to be there to experience it. In the end, if it had still been level after the first five penalties, I would have taken one as well.

"The important thing is that my team-mates put them away and we were able to win the Undecima.

"In those moments I was in my own world, I only remember that when Cristiano Ronaldo scored the winning goal we ran to embrace him and it is a moment that I will never forget."

Fan favourite Isco has scored nine goals for club and country in 2017 and is expected to be rewarded for his fine form by starting the match in the absence of injured forward Gareth Bale.

"I'm lucky to have had the support of the Bernabeu crowd since the first day I stepped out on to the pitch," he said.

"It is easier that way. Football is magic for me, it is a special feeling every time I walk out on to the pitch and touch the ball. That is how I would define what magic is.

"The Champions League anthem always motivates you in a special way. They are big nights at the Bernabeu."