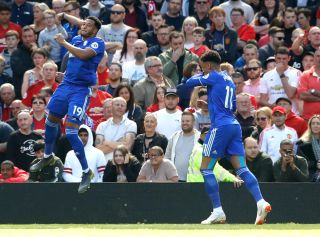 Manchester United’s disappointing season came to a fitting conclusion as relegated Cardiff went out with a bang, giving their former manager Ole Gunnar Solskjaer plenty to think about.

A campaign that started with the divisive Jose Mourinho ended with a shambolic 2-0 loss to a side relegated with a match to spare, leaving United an eye-watering 32 points behind Premier League champions Manchester City.

Nathaniel Mendez-Laing’s brace was the difference as Cardiff beat United for the first time since 1960 – quite the way for Neil Warnock to bow out in what he expects to be his last top-flight match as a manager.

But as the visitors celebrated, ex-Bluebirds boss Solskjaer was left reeling on an afternoon that highlighted just why there will be personnel changes at Old Trafford this summer.

United have regressed since the Norwegian started his reign in December with a 5-1 win in the Welsh capital, but there did appear to be a dollop of fortune about the decision that saw Mendez-Laing score from the penalty spot.

Mason Greenwood, the 17-year-old who became United’s youngest Premier League starter, was the only positive in a poor first half that was compounded nine minutes after the restart by Mendez-Laing capitalising on dreadful defending to tap home.

There were boos from those left in the stands at full-time as United’s season ended without a win in six matches in all competitions, and just two victories from 12 games

Those results highlight the need for change at Old Trafford this summer, on the field and behind the scenes, and saw United stumble home sixth, meaning their 2019-20 campaign could start in the Europa League on July 25.

But a lack of cutting edge and increasingly ragged play gave the visitors hope, with referee Jonathan Moss’ contentious decision to award a penalty against Diogo Dalot handing them a chance from the spot.

Mendez-Laing dusted himself down to slot past David De Gea to send the travelling support wild.

“You’re getting sacked in the morning” chanted the away fans as Solskjaer’s side went behind.

The lead that was close to being cancelled out as Greenwood superbly made space before unleashing a deflected shot that Neil Etheridge touched on to the post.

Greenwood hit the side-netting after Jesse Lingard tried his luck, but Cardiff were still proving an unsettling presence and De Gea did well to tip over a curling Josh Murphy effort.

United looked disjointed out of possession and little better in it, leading to a smattering of boos at the half-time whistle. After all, this was just the fourth time that Cardiff had gone into a league game ahead at the break.

Anthony Martial replaced Phil Jones at half-time and looked to have been brought down by Sean Morrison when through on goal, only for the officials to wave play on.

The change saw Scott McTominay deployed as centre-back and it backfired nine minutes later as the midfielder failed to deal with a throw-in and Murphy nipped behind to square for Mendez-Laing to tap into an empty net.

One angry United fan shouted for executive vice-chairman Ed Woodward to resign as the Bluebirds celebrated.

Rashford, Martial, Paul Pogba, Greenwood and Lingard all tried to reduce the deficit, while Bobby Reid went close to a third for the visitors.

Outgoing Cardiff midfielder Aron Gunnarsson got a touching send off when replaced, just as United skipper Antonio Valencia did when brought on for his final appearance in red.

That improved the mood a touch, but this was to be an embarrassing loss that saw the hosts finish with the same gap to relegated Cardiff as they did to neighbours City.